Studies and measurements made by satellite and GPS seem to confirm Nabta Playa’s alignment with Sirius, Alpha Centauri, and Orion’s Belt.

Thanks to recent studies we’ve been able to understand how in the distant past, Africa and much of Arabia was much different than it is today. We know that between 130,000-70,000 years ago the Egyptian region known as Nabta Playa, now an arid desert, was a savannah with abundant vegetation and wildlife. 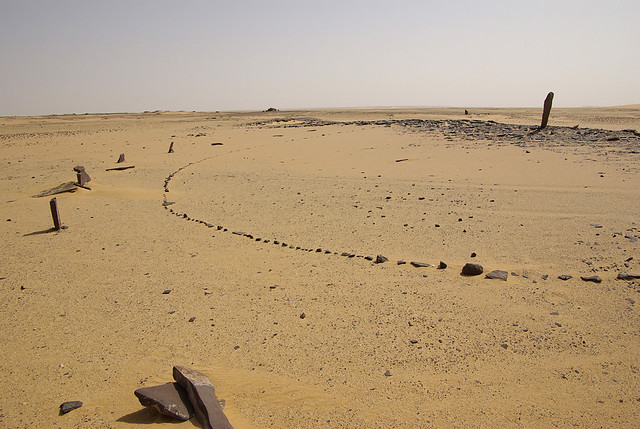 Buffalos, giraffes, antelopes, and gazelles populated this endorheic basin that came to have a large lake.

The archaeological discoveries indicate that the human presence goes back at least to the tenth millennium BC.

There, among the numerous sites scattered around the area, we find a small cromlech, raised about a thousand years before Stonehenge, whose purpose remains a profound mystery.

Located deep within the Nubian Desert, about 800 kilometers south of Cairo and 100 kilometers west of Abu Simbel lie the ruins of the Stonehenge of the desert.

The first groups of people must have been attracted to the region because of their sources of water and pasture for the cattle. The archaeological findings indicate the existence of settlements in this region in dates between the tenth and the eighth millennium BC.

These people had a culture of domesticating cattle (perhaps the first in all of Africa to practice cattle grazing), and they used ceramic utensils adorned with elaborate inscriptions.

Around the VII century BC, archaeologists say there must have been an extensive and organized settlement in the region, with a deep well of water as a source of resources.

Cabins built with poles have been found.

The people who lived in the region had a rich diet which included fruits, vegetables, millet, sorghum, and tubercles.

Also, in the seventh millennium, but somewhat later, goats and sheep were brought to the region, apparently from the northwest.

The people who inhabited the region developed quickly and upgraded their settlements.

Archeological excavations have revealed that these prehistoric people secured their survival, apparently, with a greater level of organization than their contemporaries of the Nile Valley: they erected stone structures above and below the ground, elaborately designed villages were erected, and the inhabitants of the region built deep wells that maintained water all year.

Sometimes during the VI millennium BC, evidence of a religion or prehistoric cult appeared; archaeologists discovered cattle buried in stone chambers with roofs covered with clay. Cattle were normally only killed on important occasions.

It has been suggested that the cult associated with sacrificing cattle shown in Nabta Playa marks an early evolution of the Hathor cult of Ancient Egypt.

Hathor was worshiped as a protector of the desert regions of Serabit el-Khadim.

Eventually, as this ancient people developed, sometimes between 6100 and 5800 BC one of the oldest known lithic constructions on Earth, the small “cromlech” of Nabta Playa, which is believed to have been erected a thousand years before Stonehenge.

As noted by Fred Wendorf and Romuald Schild: “The construction of the megaliths and the large complex structures at Nabta required significant effort, indicating the presence of a religious or political authority with control over human resources for an extended period of time. They, together with the calendar circle and cattle burials, represent an elaborate and previously unsuspected ceremonialism in the Neolithic of the Eastern Sahara. Although the evidence remains insecure and thus it cannot be demonstrated that these Saharan cattle pastoralists had a ranked society, this is, nevertheless, a strong possibility.”

It consists of thirty stones arranged in a circle, inside which there are six other stones.

The site also has five lithic alignments that extend from a set of central stones.

Astrophysicist Thoms G. Brophy suggested that the “megaliths” of Nabta Playa could have constituted a kind of astronomical observatory.

The circle of stones would be a calendar with four pairs of stones as doors, facing two to two: a pair oriented in a north-south direction and the second in a northeast-southwest direction, indicating the solstice.

Also, according to Brophy, the six central stones, and their different inclinations would also be part of the observatory.

He proposed that three of those stones are related to the Orion belt and the other three with the shoulder and the main star of Orion, with greater inclination than the three previous stones.

Its cycle is repeated approximately every 25,000 years, following the precession of the equinoxes.

The last minimum of the Orion belt occurred between 6400 and 4900 BC., according to radiocarbon dating of the remains of bonfires made in the circle.

In regards to the five radial alignments, Brophy’s interpretation suggested that the lines drawn from these stones to the radial stone were associated with the celestial places where several stars are represented by the central stones in the “circle-calendar” at the time of the ortho heliacal vernal equinox.

He theorized that the different distances represented the brightness of the stars, and deduced that the builders of the astronomical calendar associated the distance of the Earth to the stars with a scale of one meter = 0.799 light years, within the margin of error for astronomical distances calculated today.

Nabta Playa, one of the oldest astronomical observatories on Earth?

A study conducted by the University of Colorado in 2007 concluded that the dates of the alignments proposed by Brophy were deviating for at least 1,500 years.

The archaeologists of the University of Colorado proposed that the area would have been a ceremonial center around 6100-5600 BC, where people from different places congregated to perform animal sacrifices, evidenced by a large number of remains found on the old beach of the lake.

Around 5500 BC, more organized groups began visiting the region and built burial chambers and other burial mounds. Sometimes around 4800 BC the cromlech would have been raised, aligned approximately with the summer solstice.

More complex structures would follow him during a period that would go from 4500 to 3600 BC.

Measurements were also made by satellite and GPS, which confirmed a possible alignment with Sirius, Alpha Centauri, and Orion’s Belt.

In their study, researchers suggest that the repetitive orientation of the megaliths, stelae, human tombs and animals found reveal a very early symbolic connection with the North.

The conclusions made by experts is that the symbolism derived from the archaeological records of Nabta Playa in the 5th millennium BC is very basic, and focused on issues of practical importance for a nomadic people: cattle, water, death, land, sun, and the stars.