The Great Pyramid is a universal symbol of genius and creativity. The evidence that humankind can make the impossible possible., It was ‘opened’ in the Middle Ages by Calif Al-Mamun. His team found most of the major internal structures we see today.

Launched in October of 2015 the ScanPyramids Mission is looking through stones using non-invasive technologies in order to detect unknown internal structures.

ScanPyramids can now confirm the existence of a previously unknown internal structure: The BIG VOID.

The void looks like a corridor, it has remained hidden behind the chevrons of the North face of the pyramid for centuries.

The detected part of this big void has a more or less similar size to the known Grand Gallery. The Grand Gallery has a length of 47 meters in length, a height of 8 meters, and volume of 600m3.

The Big Void’s minimum length is 30 meters and is located between 50 to 70 meters from the ground. It could be composed of one or more internal structures. It is either horizontal or inclined, and its cross-section is similar to that of the Grand Gallery.

With the aid of muon detectors, scientists from the ScanPyramids project have found a previously unknown, 30-meter-long structure, hidden deep inside the Great Pyramid of Giza.

For millennia has the Great Pyramid of Giza remained shrouded in mystery? Now, thanks to revolutionary new technology—particle physics— new details and long-held secrets from within the monument may come to life.

Using cosmic-ray based imaging, scientists have found a narrow void embedded deep within the ancient structure.

Located just above the “Grand Gallery” which links two of the main chambers inside the Pyramid, the hidden structure goes on for around thirty meters. 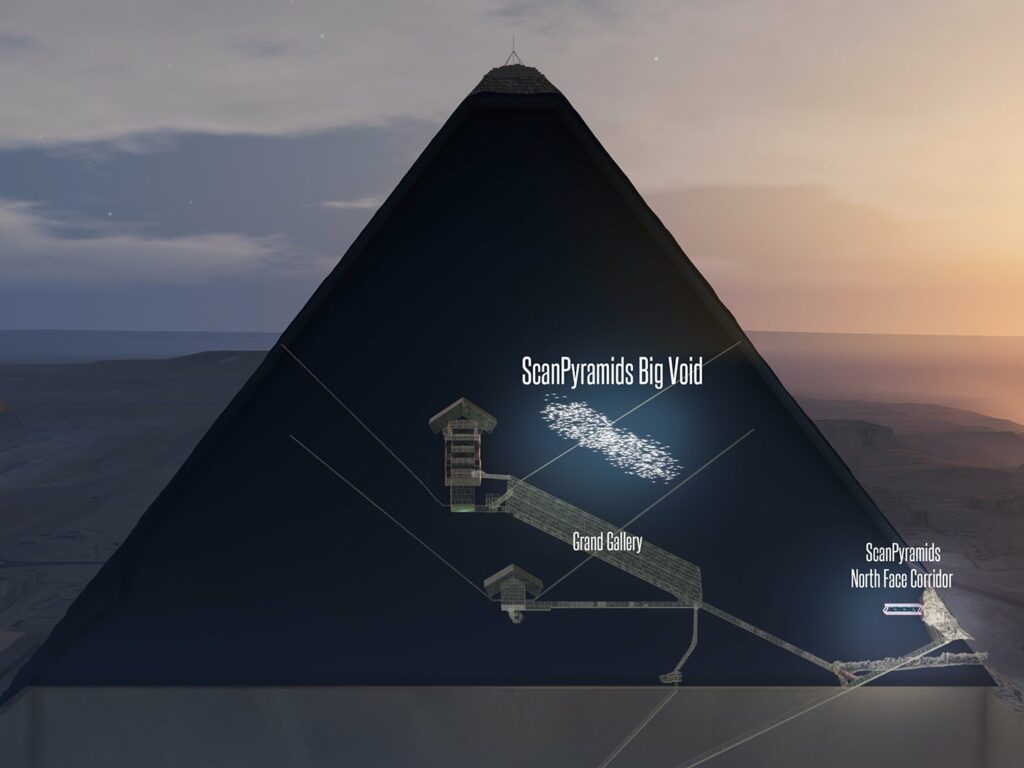 Researchers still do not know the exact design and what the purpose of the void was, but the finding has already been hailed by scholars around the globe as the biggest discovered inside the Pyramid since the 19th century.

The Great Pyramid of Giza is believed to have been commissioned by Pharaoh Khufu and completed sometime around 2550 BC.

The Great Pyramid of Giza remained as the world’s tallest manmade structure for thousands of years.

The construction technique and process used to build the Great Pyramid of Giza has remained one of the greatest scientific mystery for decades.

However, as the ScanPyramids project explains, “Just because a mystery is 4,500 years old doesn’t mean it can’t be solved.”

However, the latest discovery could help researchers understand how and why the Great Pyramid of Giza was erected thousands of years ago.

Since 2015, a group of scientists from various countries including France and Japan, and experts from Egypt’s Ministry of Antiquities, the University of Cairo, and the non-profit organization the Heritage Innovation Preservation (HIP) Institute, began scanning and studying the structure with revolutionary new technology.

Scientists set up a number of muon detectors inside the pyramid, including the Queen’s chamber.

This allowed experts to ‘view’ the inside of the Pyramid without physically touching anything.

The presence of the ‘structure’ which has been dubbed by Scan Pyramids as the  ‘Big Void‘ was confirmed using three different Muon detectors, observed and confirmed several months after it was spotted for the first time, wrote scientists in a study published in the journal Nature.

The results were analyzed several times before the discovery was confirmed.

“We have been very surprised to discover something so big—a big anomaly,” said Mehdi Tayoubi, one of the authors of the paper, during a press conference.

“A lot of people tried to dig some tunnels looking for chambers,” Tayoubi added. “But as far as I am aware, no one has tried to dig something in this area. There was no theory expecting to find something as big as the Grand Gallery here.”

Tayoubi and his fellow colleagues are firmly convinced that the “Big Void” is neither an anomaly in the data nor porous rock or loose rubble.

Furthermore, the team is 99.99% certain it is real, it exists, and a foremost expert on Egypt’s pyramids agrees with that conclusion.

“I don’t think this is bulls…,” Mark Lehner, an archaeologist and Egyptologist at the Ancient Egypt Research Association, told Business Insider. “I put credence in the results, and I think they have indications of a large empty space.”